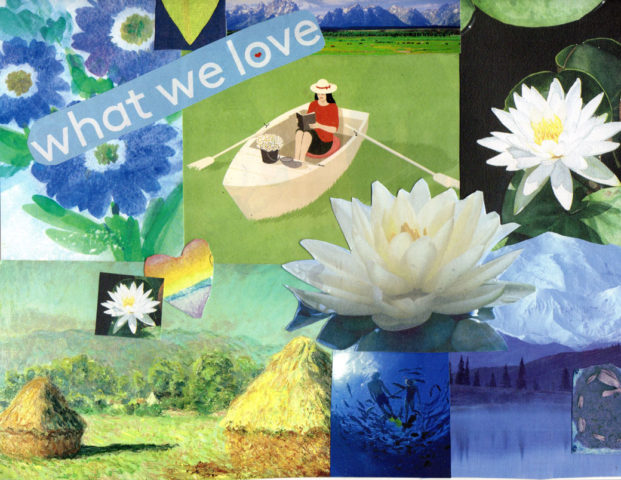 Life is full of interruptions. Our thoughts jig and jag as we go along our way.

Yesterday began somewhat normally. I woke up at 5:00 am and opened the curtains and the windows. I looked outside and there in the sky still setting was the beautiful full Aquarius moon. The moon was pearly white with a golden orb around it and then a circle of rose pink. The sky was a lovely shade of blue. I thought I would run outside and take a picture, it was so pretty.

If I held the camera just right you could see the tops of trees but none of the houses and cars on our crowded street; just the moon, the sky and a few tree tops.

I came back in the house and immediately a sheriff’s car pulled up. The sheriff got out and walked around our cars. There had been car break-ins recently. He came right up to the window to tell me that our cars had been broken into. I went outside.

Sure enough someone had pulled out all the stuff in the glove box and consoles of both cars. I knew we had nothing of value in there and there was no apparent damage. The sheriff said they had caught some of the vandals, and did I want to press charges?

I declined and went back inside to drink my coffee and do my meditation. I am learning a new-to-me technique of meditation called “Loving Kindness”. In that lesson I was supposed to think about someone I didn’t know very well. I thought about my neighbor and decided to meditate on his well-being. I don’t know him but I think we are pretty different. I was about to begin focusing on my breath when my daughter came in with her coffee. I wanted to tell her about the break-in so I decided to pause the meditation instructions and have coffee with her.

After coffee it was time to get ready for a dog walk. I leashed up my four small dogs, and off we went. As soon as we got outside I could see my neighbor was already down at the bottom of our road walking with his dog, a large black lab.

Normally I can’t walk the other way because of a very feisty German shepherd. But the German Shepherd was in the house so I turned and went the other way to avoid a confrontation of my dogs with my neighbor’s dog. For some reason my neighbor and I walk our dogs at almost the same time every morning. Whenever we encounter his big dog my little dogs go crazy with barking and biting each other. So on many days I have to strategically plan our walk. My neighbor seems to be oblivious to this and ties his dog up in the front yard, so often after we have dodged her on the walk she comes tearing out and barking at us as we pass his house on our way home. This annoys me. He could put her on the tether in the back yard.

Anyway I circled around to a different street, passed the German Shepherd’s house and got about halfway down only to meet my neighbor and his big dog coming up the street! I was mad! As I endured another round of dog barking and lunging I could hardly say a word I was so angry. I must have given him a frowny face because he looked kind of sheepish and kept walking.

The little dogs and I proceeded around the neighborhood and encountered yet another barking and aggressive dog so that we couldn’t walk down the trail to the river, which is our favorite part of the walk. I was feeling very angry and starting to think about moving to a different neighborhood. Everything was wrong with this one, break-ins, sheriffs, too many aggressive dogs, bad sidewalks and strange neighbors.

But then I started to think about a Buddhist teaching about a monk who was annoyed that people kept disturbing his meditation practice, so he rowed a small boat out into the middle of a lake and there he could meditate deeply without interruption. He was deep into his meditating when something or someone bumped his boat. His immediate reaction was to fly into a rage, but when he opened his eyes he saw it was only an empty boat that was drifting about on the lake. At that point he had a profound realization that the anger was inside of himself, and not caused by outside factors.

Remembering this story I suddenly let go of my annoyance with my neighbor and barking dogs. My neighborhood became beautiful again and I felt so much at peace with the world.

We kept on our walk and who should appear once again but my neighbor. This time he didn’t have a dog with him and so we could chat. He said that the neighborhood vandals had thrown a bunch of loose change in front of his house. On another part of the neighborhood he had found a driver’s license and an insurance card belonging to another neighbor and he was going to return it to them. I suggested maybe he should give it to the sheriff and then he could ask all our questions about the break-in. He went off down the street and the dogs and I continued on our way back to the house.

I ate some breakfast and then decided to get back to my meditation. I sat in my chair and began focusing on my breath. Then I was directed to think about a person I didn’t know very well etc. My neighbor immediately came back into my thoughts again but this time I had no anger, only a feeling of neighborly friendship. And then the doorbell rang. I knew my daughter was getting dressed for work so I paused the app and got up to answer the door. It was my neighbor, again!

He had come to tell me what the sheriff had told him about the vandals who were young and from Greensboro. That launched us into a long conversation about Covid and how many people are hurting, unemployment insurance and his job search, Biden and all the Afghani refugees that are coming, and how he bought a gun for the first time in 30 years. Of course on almost every topic we were on opposite ends of the spectrum.

He said, “You’re pretty liberal aren’t you?”
I said, “Yes extremely. I’m just an old hippie.”
He said, “I thought so. I figured I’d better not talk politics with you.”

And that launched another round of conversation about the legalization of Marijuana and the benefits of smoking, something he likes to do, but I don’t.

My daughter came out and joined the conversation and we went another round on medical insurance and who was selling their house in the neighborhood and more.

Eventually he went home, my daughter went to work and I finally got to do my Loving Kindness Meditation with a peaceful heart while the dogs fell asleep on the bed.